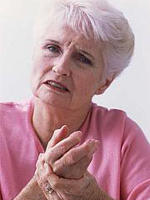 Aging, joint pain and arthritis seem to go hand in hand. While Arthritis is not a single disease but rather a host of conditions that adversely affect the joints and related tissues, it seems to be more prevalent today than it was for our ancestors. This is likely because we live longer, are overweight, eat a diet that is highly processed and devoid of nutrition, and lead more sedentary lifestyles.

Arthritis is generally characterized by joint pain and stiffness. Osteoarthritis, the most common form, affects approximately 70% to 80% of the population over the age of 50. The onset of this disease is characterized by morning stiffness, cracking joints, and pain.

As the condition progresses, increasing pain and loss of range of motion of the affected joints is usually noted. New research is beginning to shed light on how osteoarthritis develops at the cellular and molecular levels. The “bad guys” seem to be proteins called Cytokines.

These proteins carry messages between cells and regulate immunity and inflammation. The two proteins that play an essential roll in the destruction of cartilage and the inflammation process are called TNG-alpha (tumor necrosis factor -alpha) and IL-1 beta (interleukin-1 beta).

The Old Method of Treatment Just Doesn’t Cut It Anymore!

The body’s inflammatory pathway has two branches, COX (cyclooxygenase) and LOX (lipoxygenase). Aspirin and other non-steroidal anti-inflammatory drugs (NSAIDS) such as Ibuprophren, Advil, Motrin, Naprosyn, and Aleve, block the COX enzyme in both forms, COX-1 and COX-2.

COX-2 produces prostaglandins, which are powerful triggers of pain and inflammation. However, COX-1 is necessary for stomach lining protection, so interfering with its activity can cause gastric disturbances ranging from simple discomfort to bleeding ulcers. This is the reason that NSAIDS cause stomach upset.

Because of the negative effects upon the stomach pharmaceutical companies developed the newer COX-2 inhibitor drugs such as Vioxx, Celebrex, and Bextra in an effort to prevent this problem. However, these COX-2 inhibitors cause an increase in the pro-inflammatory signaling molecules TNF-alpha and IL-1 Beta.

In this way the COX-2 drugs cause an increase in degenerative processes and tissue damage even while alleviating the pain and swelling of arthritis.

Treatment is typically aimed at alleviation of symptoms since arthritis will generally become worse with time. However, not treating the condition will lead to more rapid progression of the disease, and greater permanent damage to the joints as well as increased joint pain and loss of range of motion.

At CARE Wellness Center we are aware that sometimes medications are needed, however, there are natural remedies and alternative therapies that are available which in most instances work well, without the “downside” of medications.

Our physicians will try to incorporate these natural approaches to treating your condition wherever possible in an effort to alleviate the symptoms of arthritis – limit your pain, increase the range of motion of your joints, and slow down the damage to the joint tissue.

Alternative Modalities of Arthritis Treatments may include:

Call us today at 954-586-8088 to get started. CARE Wellness Center provides alternative treatments and natural remedies for joint pain and arthritis, including rheumatoid arthritis and osteoarthritis and most arthritis symptoms.