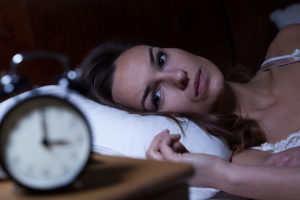 Insomnia is one of the most common disorders Americans face today. 50-70 million of the adult population suffers from sleep disorder. Ten percent of affected adults have chronic insomnia while 30 percent experience sporadic symptoms. A further 25 million Americans suffer sleep deprivation due to obstructive sleep apnea 9-12% of them being women.

The most distinguishing trait about the disorder is the lack of quality sleep. Adults typically need seven to eight hours of sleep to function at their best during the day. People affected by insomnia usually don’t get as much sleep. You may find it difficult to fall asleep when you go to bed. In other instances, people find it hard to fall asleep after waking up in the middle of the night.

People who don’t get enough sleep during the night are not productive during the day. They experience symptoms of poor quality sleep such as irritability, concentration and memory problems as well as depression. Insomnia has also been shown to cause obesity, increase the risk of heart disease, and to compromise the immune system. People with insomnia may also have trouble socializing.

What type of insomnia is affecting you?

Insomnia generally comes in one of three ways. More often than not, people experience transient insomnia which occurs due to daily occurrences. The person regains their normal sleep pattern once they overcome the temporary situation.

The condition may also show up as acute insomnia, which affects a large number of adults at one point or another in their life. These are short periods of time when you experience insomnia after which it disappears on its own. Acute insomnia may last for some days or weeks. If the condition lasts any longer than a month, it is chronic insomnia.

In most cases, insomnia is viewed as the result of another medical or psychiatric condition. There are cases, however, where insomnia is the primary condition. This type of insomnia, which is not associated with any other conditions, is primary insomnia.

Marijuana use is most prevalent in the United States among 18-25 year olds, with approximately 32% of non-college and 35% of college-attending persons reporting yearly use, and 19% of emerging adults (18-29 years old) reporting monthly marijuana use.

According to Johnston L et al., Marijuana is more popular with the younger ages in the United States. Young adults in the ages of 18-25 years old have used marijuana at least once in the past month. 35% of college-going students use cannabis while 32% of non-college persons have reported having used cannabis in the last month.

Findings by Walsh Z et al. showed that Marijuana has been used for a long time now by patients who self-medicated to alleviate symptoms of various conditions including insomnia. In their research about the benefits of marijuana for insomnia, Babson KA et al. also found that CBD has the effect to induce the onset of sleep. Patients just have to keep in mind what strains to go for. Grella CE and colleagues also found that many cannabis users who use the drug for recreational and medicinal purposes also use it for insomnia. Indica strains are known to have a full body high, which induces sleep. Sativa strains are known for the stimulating head high.

Federal regulations have stifled research efforts into the many benefits of the cannabis plant. Even so, there is research to support the use of marijuana to increase quality of sleep. Many people suffering from insomnia who have used conventional medicine and cannabis admit that the latter offers better results. Marijuana is also preferred since it has no adverse side effects and is not habit-forming.

Cannabis affects the body differently due to the different types of cannabinoids it holds. In this case, cannabinol (CBN) is the active ingredient that has a sedating effect. THC breaks down to become CBN , so aged cannabis tends to have more of this anaesthetizing effect.

There are a number of indica strains known to work very well for insomnia patients;

Patients have to find a strain that is ideal for them among these and several others. Once a patient identifies a strain that gels with their body, they can medicate when they intend to sleep. The effects take different times to set in according to your mode of medication.

If you’re suffering with insomnia and have tried other methods to no avail you should think about medical marijuana. It is now legal in the state of Florida. Care Wellness Center now has a Medical Marijuana doctor on staff that would be glad to assist you. Call us today at (954) 586-2273 to schedule your visit.