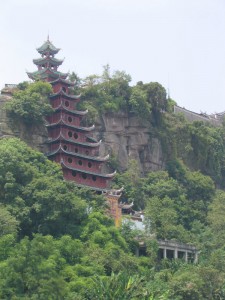 Chinese Medicine dates back over 3,000 years. It was not developed by any particular individual; rather, it grew out of the necessity of maintaining good health among the Chinese people. The ancient Chinese, like all of us, had to struggle against diseases in order to stay in good health.

Traditional Chinese Medicine is based, first and foremost, on a classic published in the third century B.C., entitled Nei-Jing, or The Yellow Emperor’s Classic of Internal Medicine. Western medical books often become obsolete in the course of time (most likely within a few years) but many books on Chinese Medicine written by the early Chinese masters have become timeless classics. The principles for treating disease and illness, as outlined in the Nei Jing, are rooted in the early philosophies ofTaoism and the theory of Yin and Yang.

The logic underlying Chinese medical theory – a logic that assumes that a part can only be understood in its relation to a whole – can be traced back to the theory of Yin and Yang. Yin Yang theory is based on the philosophical construct of two polar complements, called Yin and Yang. These complementary opposites are neither forces nor material entities. They are convenient labels used to describe how things function in relation to each other and to the universe.

They are used to explain the continuous process of natural change, and in relation to Chinese medicine, they represent a way of thinking and organizing and ultimately diagnosing a patient’s illness according to disharmony of the Yin and Yang. The acupuncture physician uses his or her perception to recognize the disharmony, and then must apply his or her specialized skill to try and restore the patient’s health – to achieve balance and harmony within a living organism. 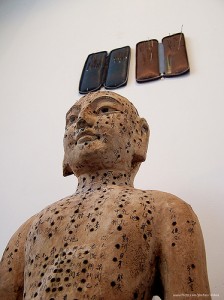 A patient’s symptom, therefore, is not traced back to a cause, but is looked at as a part of a total system. If a person has a complaint or symptom, Chinese medicine wants to know how the symptom fits into the patient’s entire being and behaviour. Illness is understood in the context of a person’s life and history. Understanding that overall pattern, with the symptom as part of it, is what Chinese medicine is all about.

For example, both a woman and a man may come in to the clinic complaining of back pain. It appears on the surface that both of these people have the same condition. Not so. Upon further interview and examination and using various diagnostic tools such as tongue diagnosis and pulse diagnosis, we learn that the woman also has hot flashes, night sweats, thirst, and irritability. Her tongue appears very red and peeled, her pulses rapid.

These signs indicate a pattern of disharmony called Yin Deficiency. This condition would be treated accordingly with acupuncture needles and Chinese herbs. As for the man, we learn that he has lower back pain, frequent urination, cold limbs, pale complexion and fatigue. His tongue is pale, swollen, and wet. His pulse is deep and weak. He has a pattern of disharmony that we know to be called Yang Deficiency. The treatment differs considerably with that of the females treatment, although both came into the clinic with the same complaint.

We offer free consultations to those wishing to learn how Chinese Medicine can help their condition. Please call us at 954-586-8088 to schedule your consultation today. We proudly serve the communities of Margate, Coral Springs, Coconut Creek, Parkland, and Deerfield Beach Florida.